Vancouver real estate: What lies ahead in 2018?
The Lag Effect: Long approvals processes impacts market
Your guide to moving to a new city
Car insurance: The most expensive (and cheapest) areas
IKEA Play Café pop-up shop launches in Toronto
Airbnb investment property: The pros and cons
The fastest-growing cities in Canada
Custom furniture makes a comeback
How to make the most of your “plus den” floor plan
Menkes unveils Banksy's artwork at One York
Is this the new standard for a $1 million home?
A peek inside America’s most expensive home
Page12...18

Vancouver real estate: What lies ahead in 2018? 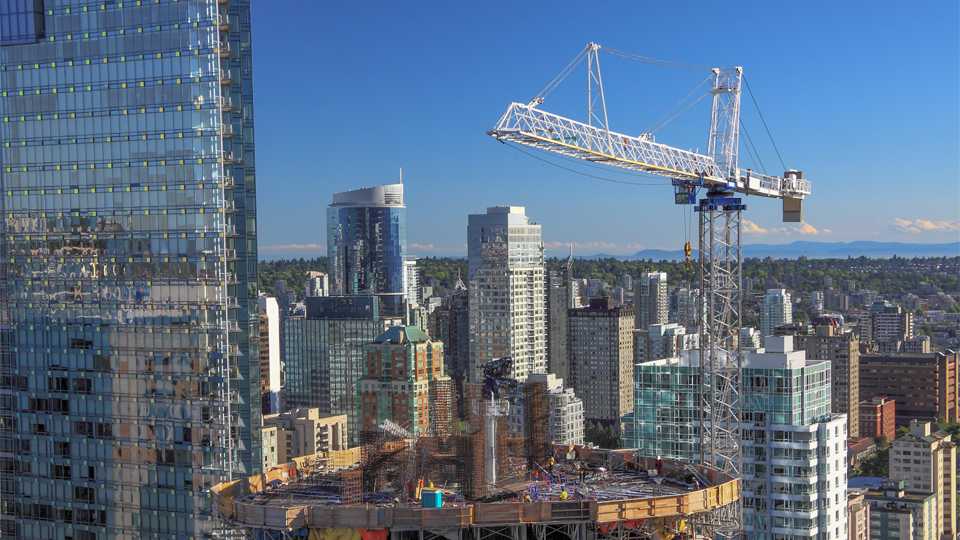 Vancouver has witnessed unbeatable growth over the years. A booming economy, real estate market and sought-after location have combined to make Vancouver a world-class city. It has also become one of the priciest housing markets in North America. While the city will continue to thrive, some things are expected to take a slight turn in 2018.

The start of the slowdown

British Columbia is expected to reign as the fastest-growing provincial economy in 2018, expanding 2.7 per cent, though down slightly from 3.2 per cent forecast for 2017. The slowdown is attributed to several factors, most notably the cooling housing market.

While unemployment remains low in Greater Vancouver, it’s important to note the disparity between income and housing affordability. According to the Real Estate Investment Network (REIN), the median income in Vancouver increased 16.8 per cent to $65,327 between 2005 and 2015, well below the provincial and national median incomes. This is coupled with the highest home prices in the country, resulting in a growing affordability problem. 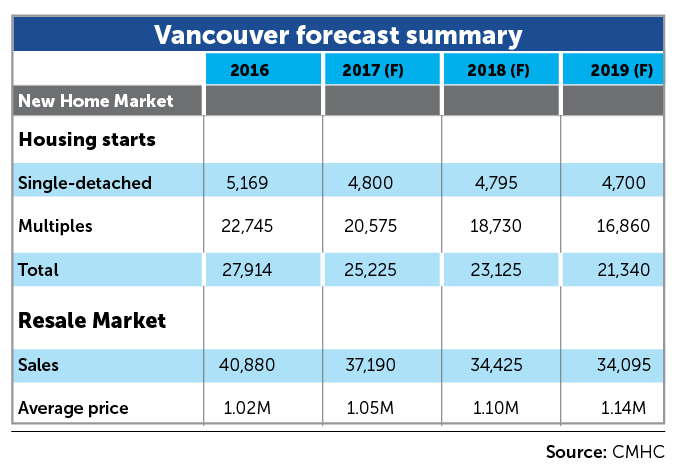 A decent economy, along with the city’s natural beauty, will continue to attract newcomers to the area. In-migration is expected to exceed 30,000 people in 2017 and 2018. This is the highest since 2010 and will boost the city’s population by 1.7 per cent in 2017 and another 1.4 per cent in 2018, according to The Conference Board.

Low mortgage rates (though rising), steady population growth along with the aging Millennial generation entering their homebuying years, and ongoing job creation have all led to increased demand, which will continue to outpace supply in 2018.

High prices for detached housing have steered homebuyers toward attached properties. A recent release by ReMax stated, “This year saw the single-family detached home and condo markets diverge on distinctly different paths in Canada’s two highest-priced real estate markets, Greater Vancouver and the Greater Toronto Area. The trend is expected to continue into 2018 as a mix of relative affordability for condo units and price appreciation for detached homes in recent years, combined with government policy changes in both markets, has helped push an influx of buyers toward condo ownership.” 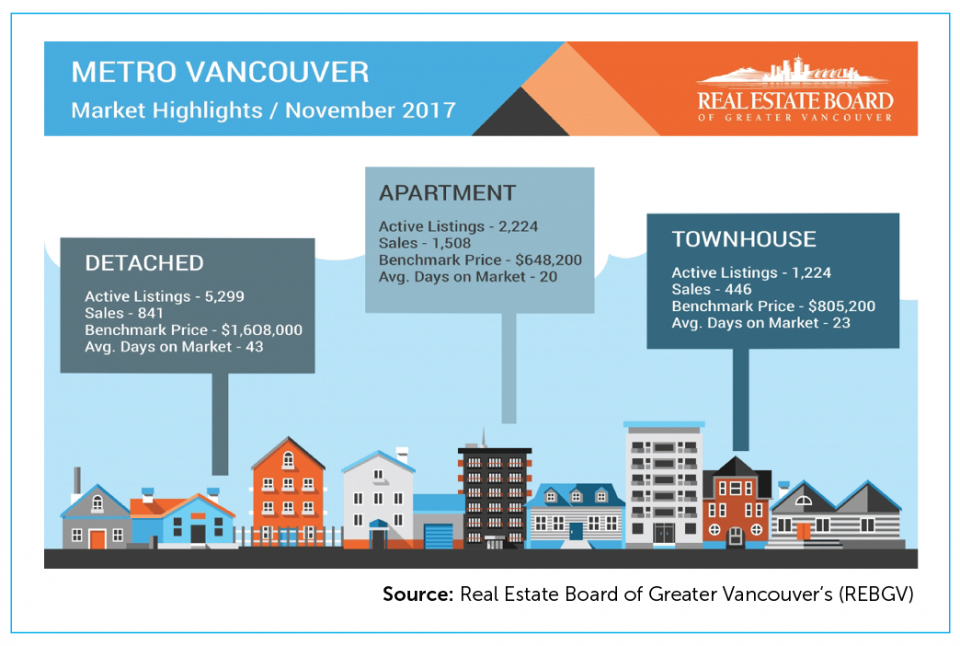 Metro Vancouver is experiencing above-average demand, while witnessing below-average supply. “We’re seeing steady demand in today’s market,” says Jill Oudil, REBGV president. “Homebuyer activity is operating above our long-term averages, particularly in our townhome and condominium markets… While we’re seeing more listings enter the market today than we saw at this time last year, we have a long way to go before our home listing inventory rises back to more historically typical levels.”

While remaining above the 10-year average, housing starts will moderate in 2018 and 2019, compared to the all-time high in 2016, according to Canada Mortgage and Housing Corp. (CMHC).

The large increases in the first half of 2016 will result in an increase in home completions in 2018. However, due to high demand, most have already been pre-sold.

Royal LePage projects that prices in Greater Vancouver will increase by 5.2 per cent in 2018, rising to an aggregate price of $1.35 million

With single-detached homes being out of reach for most Vancouverites and the increasing absence of foreign buyers, inventory levels will rise for this market segment, according to The Conference Board, causing prices to moderate.

The growing affordability issues and increased demand for attached properties raises the question: Will detached properties meet the same fate as their detached-housing counterpart, and fall out of reach for most homebuyers? Keith Stewart, senior market analyst at CMHC, doesn’t think so, telling NextHome: “Attached properties lead single-family, both in terms of sales activity and price growth throughout the Greater Vancouver area in 2017. While prices for attached properties are trending up as of Q4 in 2017 and could continue to rise in the near future, most trends do not continue indefinitely.

Last year welcomed rising rates and new regulations. Interest rates are expected to rise gradually over the next two years. CMHC predicts that the posted five-year mortgage rate will range from 4.9 per cent to 5.7 per cent in 2018, and within the 5.2 per cent and 6.2 per cent in 2019, rising 160 basis points at most between 2017 and 2019.

The policy that will arguably have the largest – and most immediate – impact on the housing market is the new stress test that took effect on Jan. 1, 2018. Royal LePage predicts that it will significantly influence the market, especially in the first six months of the year, as buyers reevaluate their finances and expectations, and adopt a “wait-and-see” approach. Reducing buyers’ purchasing power, the stress test will likely result in further demand for entry-level properties, namely the condominium segment.

This period, however, may simply be the calm before the storm. “Insufficient housing supply in Canada’s largest cities will begin to drive significant price increases to higher than normal levels once the market adjusts to the new stress test,” says Phil Soper, president and CEO, Royal LePage. “Aggressive home price inflation is still more of a threat today than the risk of a market crash in Toronto or Vancouver.”

Where is Vancouver on the real estate cycle?

Based on REIN’s Real Estate Cycle Scorecard Clock, the economic fundamental key drivers and the market influencers indicate Vancouver’s real estate market is: “end of boom,” but prices, especially in the condo market, are not expected to drop dramatically from this peak. 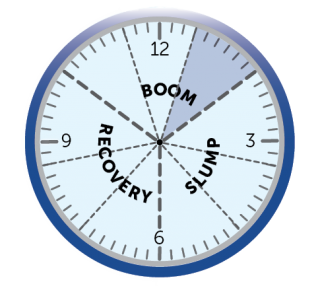 Vancouver’s economy is slowing, but will remain solid. According to REIN, “Vancouver has all the right economic fundamentals of a world-class city, and attracts foreign investors and capital as a safe-haven on the global scale. Its economy is insulated. While affordability affects the return on investment, strategic investors, over the long-term, will find relatively safe investment opportunities, when timed right and with the right property.”

To hopeful homebuyers: The beginning of a slowdown and the end of a boom won’t translate into a large dip in home prices. “Any buyer hoping for a major affordability breakthrough in the Vancouver area will be disappointed,” says Royal Bank of Canada’s (RBC) Housing Trends and Affordability report, September 2017. “Not only are prices on the rise again but interest rates have begun to climb as well. The prospects for further rate hikes in the period ahead will put growing upward pressure on homeownership costs in Vancouver.”

With new policies possibly impacting demand, low inventory, high prices and a rising interest rate environment, buyers “need to be carefully examining their personal finances and their motivations for purchasing” advises Keith Stewart, senior market analyst at CMHC. “Buyers should conservatively assess their income and debt levels and ensure rising rates do not lead to undue stress on their finances.”

Sonia Bell is a writer and editor at NextHome. She has her masters in Communications studies and loves exploring all things real estate – from home décor trends to neighbourhood and market news.