Homes are selling briskly throughout the GTA: CREA

By NextHome Staff March 16, 2017
(CNW) — According to statistics released today by The Canadian Real Estate Association (CREA), national home sales were up on a month-over-month basis in February 2017.Home sales over Canadian MLS Systems rose by 5.2 per cent month-over-month in February 2017 to reach the highest level since April 2016.While February sales were up from the previous month in about 70 per cent of all local markets, the national increase was overwhelmingly driven by an increase in activity across the Greater Toronto Area (GTA) and environs. 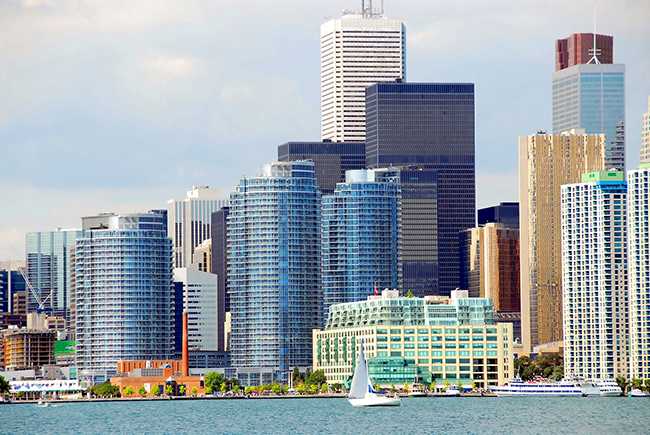 Actual (not seasonally adjusted) activity was down 2.6 per cent from levels for the same month last year. The decline reflects a moderation in sales in the Lower Mainland of British Columbia compared to extraordinarily elevated levels recorded one year ago.“Housing market trends continue to differ by region,” said CREA president Cliff Iverson. “Homes are selling briskly throughout the Greater Toronto Area and nearby communities. Elsewhere, competition among potential buyers is less intense, so listings take longer to sell.”“In and around Toronto, many potential move-up buyers find themselves outbid in multiple-offer situations amid a short supply of listings,” said Gregory Klump, CREA’s chief economist. “As a result, they aren’t putting their current home on the market. It’s something of a vicious circle from the standpoint of a supply shortage and a challenge for first-time and move-up homebuyers alike.“By contrast, housing markets in urban markets elsewhere in Canada are either balanced or are amply supplied. Because housing market conditions vary by region, further tightening of mortgage regulations aimed at cooling the housing market in one region may destabilize it elsewhere.”The number of newly listed homes rose 4.8 per cent in February 2017, led by the GTA and nearby markets following a sharp drop in January. More than one-third of all local housing markets saw new listings recede from levels the previous month, including those in the Prairies, northern Ontario and the Atlantic region. Meanwhile, new listings in the Greater Vancouver region fell significantly from January levels, having retreated by nearly 25 per cent to reach the lowest level since 2001.With similar monthly increases in both sales and new listings, the national sales-to-new listings ratio was 69 per cent in February, little changed from 68.7 per cent in January.A sales-to-new listings ratio between 40 and 60 is generally consistent with balanced housing market conditions, with readings below and above this range indicating buyers’ and sellers’ markets respectively.The ratio was above 60 per cent in almost 60 per cent of all local housing markets in February, the majority of which are located in British Columbia, in and around the GTA and across Southwestern Ontario.The number of months of inventory is another important measure of the balance between housing supply and demand. It represents how long it would take to completely liquidate current inventories at the current rate of sales activity.There were 4.2 months of inventory on a national basis at the end of February 2017, down from 4.5 months in January and the lowest level for this measure in almost a decade.The imbalance between limited housing supply and robust demand in Ontario’s Greater Golden Horseshoe region is without precedent.The number of months of inventory in February 2017 stood below one month in the GTA, Hamilton-Burlington, Oakville-Milton, Kitchener-Waterloo, Cambridge, Brantford, Guelph, Barrie & District and the Kawartha Lakes region.The Aggregate Composite MLS HPI rose by 16 per cent year-over-yeary in February 2017. This was up from January’s gain reflecting an acceleration in home price increases, particularly for single family homes in and around Toronto.Prices for two-storey single-family homes posted the strongest year-over-year gains (+17.9 per cent), followed closely by townhouse/row units (+16 per cent), one-storey single family homes (15 per cent) and apartment units (13.7 per cent).While benchmark home prices were up from year-ago levels in 11 of 13 housing markets tracked by the MLS HPI, price trends continued to vary widely by location.In the Fraser Valley and Greater Vancouver, prices are slightly off their peaks posted in August 2016. That said, home prices in these regions nonetheless remain well above year-ago levels (+21.4 per cent year-over-year and +14 per cent year-over-year respectively).Meanwhile, benchmark prices continue to climb in Victoria and elsewhere on Vancouver Island, as well as in Greater Toronto, Oakville-Milton and Guelph. Year-over-year price gains in these five markets ranged from about 18 per cent to 30 per cent in February.By comparison, home prices were down by 1.9 per cent year-over-year in Calgary and by 1.2 per cent year-over-year in Saskatoon. Prices in these two markets now stand 5.6 per cent and 5.1 per cent below their respective peaks reached in 2015.Home prices were up modestly from year-ago levels in Regina (+3.5 per cent), Ottawa (+3.8 per cent), Greater Montreal (+3.3 per cent) and Greater Moncton (+1.2per cent).The MLS Home Price Index (MLS HPI) provides the best way of gauging price trends because average price trends are prone to being strongly distorted by changes in the mix of sales activity from one month to the next.The actual (not seasonally adjusted) national average price for homes sold in February 2017 was $519,521, up 3.5 per cent from where it stood one year earlier.The national average price continues to be pulled upward by sales activity in Greater Vancouver and Greater Toronto, which remain two of Canada’s tightest, most active and expensive housing markets.That said, Greater Vancouver’s share of national sales activity has diminished considerably over the past year, giving it less upward influence on the national average price. The average price is reduced by almost $150,000 to $369,728 if Greater Vancouver and Greater Toronto sales are excluded from calculations.Further information can be found at http://crea.ca/statistics. 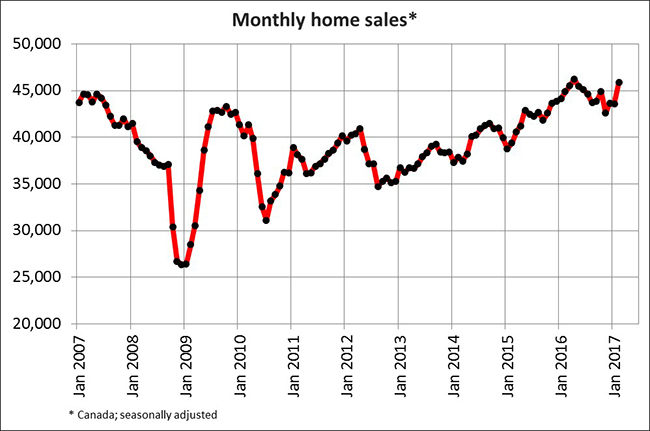