In the GTA, 2017 set a record high in new condo apartment sales and a record low in single-family home sales

In the GTA new home market, 2017 was a year of declining inventory, high prices and strong sales, setting a record high in new condo apartment sales and a record low in single-family home sales, the Building Industry and Land Development Association (BILD) announced January 26, 2018.Overall in 2017, there were 44,143 new homes sold in the GTA, according to Altus Group, BILD’s official source for new home market intelligence. That makes 2017 the fourth strongest year for new home sales in the GTA since Altus Group started tracking in 2000. Only 2002, 2011 and 2016 had stronger new homes sales, with 2002 being the highest at 53,660 units sold.Of the new homes sold in 2017, 82.5 per cent (36,429 units) were condominium apartments in low, medium and highrise buildings, stacked townhouses and loft units, the highest number of condo apartments sold in any year in the GTA, while 17.5 per cent (7,714) were single-family homes, including detached, link, and semi-detached houses and townhouses (excluding stacked townhouses), the lowest number sold since Altus Group started tracking in 2000. 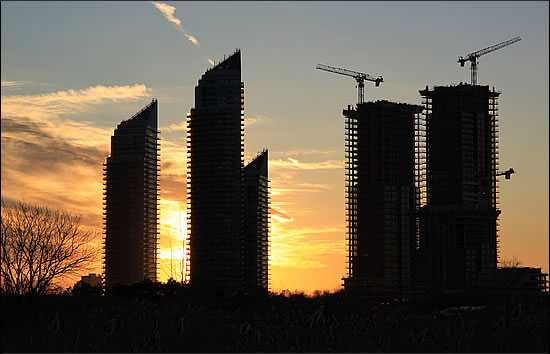 “Low inventory and escalating prices across the board are behind the highs and lows of the sales numbers we saw in 2017,” said David Wilkes, BILD’s new president and CEO. “Our industry wants to build new homes to increase the housing supply in the GTA, but we need municipalities to work with us to expedite the process by simplifying the development approval process, updating zoning by-laws to align with provincial policies and servicing developable land with critical infrastructure.”The supply of new housing is typically measured by the number of new homes available for purchase in builders’ inventories at the end of the month and includes units in pre-construction, under construction and completed projects. At the end of December 2017, there were 11,397 new homes available for purchase, down 13.2 per cent from 13,136 at the end of December 2016 and 60.3 per cent below the 28,739 new homes available 10 years ago. Since 2000, the total inventory at the end of each month has typically been between 20,000 and 30,000 units. For over a year and a half now, it has been below 20,000 units.The decline in single-family home inventory has been even more dramatic. At the end of December 2017, there were 3,481 new single-family homes available for purchase, down 74.4 per cent from 10 years ago.New home prices rose again in December 2017, with the benchmark price for available new single-family homes at $1,225,774, which was 23.2 per cent above last December's benchmark price of $995,116. Meanwhile the benchmark price for available new condo apartments was $716,772 in December, 41.3 per cent above the December 2016 benchmark price of 507,128.“While many end user buyers have been looking to the new condominium apartment sector for more affordable homes, some are now starting to be priced out of this segment as well," said Patricia Arsenault, Altus Group’s executive vice president of Research Consulting Services.Wilkes said BILD will be raising issues of housing supply and affordability as the municipal elections approach this fall.“As the GTA prepares for unprecedented growth, we must get this right to ensure the region continues to be one of the most dynamic and vibrant places to live,” he said. “We are calling on governments at all levels to ensure that people who choose to live in the GTA can afford to purchase a new home.”December 2017 New Home Sales by Municipalitybildgta.ca

Robust Activity Will Continue In 2018

The “2018 GTA Flash Report,” which provides a comprehensive review of the real estate market in the GTA based on 2017 data, was released January 26, 2018 by the Altus Group. The report highlights another record-breaking year for total investment property sales volumes, and looks at the performance of commercial leasing, land and residential sectors in the GTA.Investment property sales, including land sales, as well as sales of office, retail, industrial, hotel and rental apartment properties, reached a total of $23.5 billion in 2017, a 38 per cent increase from 2016 and a record for the seventh consecutive year. Residential land sales contributed a record $8.5 billion to the total, up $2.8 billion over 2016.In the office-leasing sector, the GTA-wide office vacancy rate fell in 2017 to 8.9 per cent (including vacant but leased space), even with the completion of 13 new office buildings that have added two million square feet of inventory. Most of the new office supply under construction is in the downtown submarket, where the vacancy rate at the end of 2017 was below 6 per cent.Turning to the new home sector, Altus Group’s data shows that total new home sales in the GTA reached just over 44,000 units in 2017, the fourth highest level on record. New condominium apartment sales, which includes apartments in low, medium and high-rise buildings, lofts and stacked townhouses smashed the previous annual record set in 2016 with just over 36,400 units in 2017.“Altus Group data show that homebuying intentions remain strong in the GTA, despite the many roadblocks that have been put in potential buyers’ way due to factors such as price escalation in recent years, rising interest rates, tighter lending criteria and additional stress testing,” said Matthew Boukall, senior director at Altus Group.The buoyancy in the GTA real estate sector in 2017 is poised to continue this year according to Altus Group experts. Below are key predictions for 2018:Office shared work spaces: The trend of renting workstations within a larger office space will grow in the GTA as low vacancy rates lead to higher rents. Look for this segment to grow not just in the downtown market, but throughout the GTA, as employers look to accommodate staff pushed further out in search of more affordable housing options.Land sales: Residential land sales are expected to be strong in 2018, although higher prices and various policy changes have introduced more uncertainty to the land market. High-demand areas are likely to remain expensive, which could push some developers to seek more affordable options outside traditional core areas.New homes market: New condominium apartment sales are expected to remain elevated in 2018. However, surpassing 2017 levels will be a challenge. While investor interest continues to be strong, some end user buyers who have been looking to the new condominium apartment sector for more affordable homes are now starting to be priced out of this segment as well. Some modest increase in new single-family sales is possible, however sales in this segment will continue to be challenged by lack of available product, in particular options that are affordable to a broader range of buyers.Industrial and Retail: Demand for industrial space will remain strong as online and traditional retailers seek warehouse space to support their e-commerce business strategies. Retailers will continue to shrink their brick and mortar footprint and traditional retail space will continue to evolve as retail centres focus on consumer experiences, especially food themes, to draw in traffic.Investment Property: Investor appetite will remain strong in 2018. With interest rates moving up, there is potential for some shift away from debt-financed buyers toward more cash-focused institutional buyers.Download the full “GTA Flash Report 2018” at datasolutions.altusgroup.com/gta-flash-report-2018altusgroup.com