The GTA new home market saw a record number of condominium unit sales in August, according to the Building Industry and Land Development Association (BILD).

Condominiums, including units in low-, medium and highrise buildings, stacked townhouses and loft units, accounted for 3,162 units sold in August, according to Altus Group, BILD’s official source for new home market intelligence. It was the highest number of condominium apartments sold in August on record – up 35 per cent from last August’s robust condo sales, and 129 per cent above the 10-year average. Sales of single-family homes, including detached, linked, and semi-detached houses and townhouses (excluding stacked townhouses), accounted for 605 units sold in August, 15 per cent below the 10-year average. 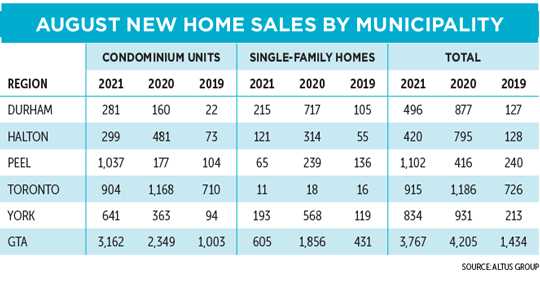