Tarion's 2018 High-Rise Builder of the Year, Plaza, is launching the sequel to the first phase of Plaza's Theatre District Condominiums that promises to be another blockbuster in the heart of the Entertainment District.Locations simply don't come any better than this for urbanites who appreciate culture, entertainment, fine dining and a sophisticated lifestyle. The first phase of Theatre District Condos at 8 Widmer Street, consisting of a residential 49-storey tower and six historic townhouses, sold quickly.The development is in the midst of some of the city's most desirable shopping, nightlife and dining options. It's a highly walkable neighbourhood well-served by transit and offers easy access to the PATH system. 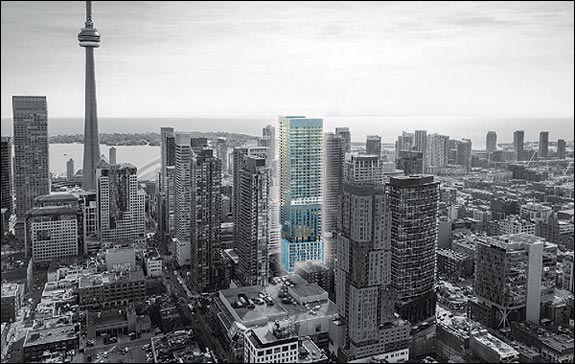 Phase 2 at 28 Widmer, at the corner of Adelaide, will incorporate a hotel owned by the international Riu hotel chain on the first 24 floors, with a 23-storey residential condo above. While Widmer is a quiet, residential street, it's steps from the vibrancy of the Entertainment District and the action of the annual Toronto International Film Festival."Riu identified the Toronto marketplace 10 years ago as a location they wanted and the Theatre District location is one of the best, if not the best, urban location in the country," says Plaza's Scott McLellan. "The Toronto hotel is Riu's first venture in Canada."The hotel will be a separate entity from the condos, with its own entrance, elevators, and amenities. It's expected to attract many international guests, as well as North American visitors.McLellan says Riu urban hotels have a different concept than their all-inclusive Caribbean resorts. While the Theatre District will incorporate a bar and a restaurant that will servebreakfast and lunch, the idea is to encourage people to get out and explore the neighbourhood's cafes and restaurants.Buyers of the residential condos will also enjoy a sophisticated lifestyle in the heart of one of the city's most exciting neighbourhoods. "It's become an increasingly popular place to live," says McLellan. "People want to be part of the energy of the area, close to great restaurants, theatres, TIFF and Billy Bishop Airport."The architecture of the Theatre District Condominiums, designed by Quadrangle Architects, respects the King West neighbourhood's heritage flavour while incorporating modern elements. The materials, scale and detailing of the two towers' 11- storey podiums pay tribute to the 1920s Art Deco-era Commodore Building immediately west of Adelaide. The towers use faceted, shaded metal panels within an elegant pattern.The hotel and condominiums of 28 Widmer are seamlessly interwoven in the tower design, and the upper level residential suites enjoy expansive downtown views. The two towers' individual lobbies are connected internally and they share amenity spaces at the ground floor and the third floor of the podium at 8 Widmer.Responding to feedback received from buyers in the first phase, McLellan says Phase 2 will include many larger suites, with 70 per cent of the units offered as two or three-bedroom layouts, with the remaining 30 per cent one-bedroom or one-bedroom with den. "There is a demand for larger suites and a lot of people are understanding if they are going to be living downtown in the future, they are going to want to live in space. In the first phase, the larger units sold quickly."Some two-bedroom units are 675 square feet with an internal second bedroom, while others are 720 square feet with all bedrooms having windows. The shape of the building has allowed Plaza to create many very nice corner units. Units will range from the low $600,000s to $1.7 million, still affordable when compared to detached home prices in the city.Residents also benefit from a Triple A location and first-class amenities including outdoor pool, fully equipped gym and party room. They'll also be in an amenity-rich neighbourhood that includes some of the city's best retail stores and restaurants.To register for Phase 2 of this exciting development visit Plaza.