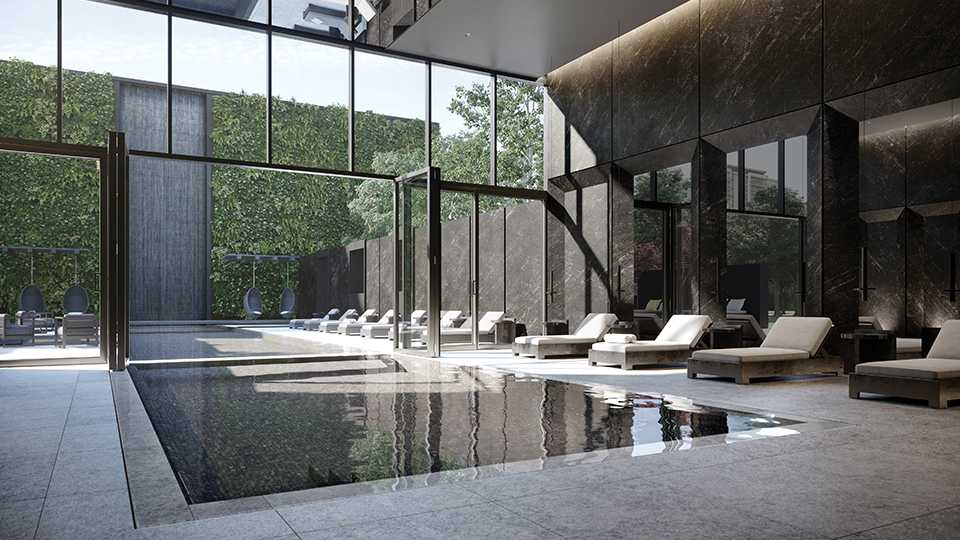 After announcing a collaboration with Pharrell Williams in the fall, Reserve Properties and Westdale Properties have released design and development plans for untitled, the name of this new Yonge and Eglinton project.

The seed for untitled’s architecture is rooted in lead architect Mansoor Kazerouni of IBI Group’s cultural background. Kazerouni introduced the concept of a jugalbandi, a performance in Indian classical music featuring an intricate duet between two solo musicians. The term translates to mean entwined twins and for Kazerouni, a jugalbandi informed how his work could entwine with sound waves from one of Pharrell’s songs.

Using parametric design, the sculpted, fluid form of the balconies follows the wave pattern of Pharrell’s hit song Gust of Wind, articulating the building as a visual abstraction of music.

“We arrived at the concept fairly early in the process and worked with Pharrell to select a song that really meant something to him and could help bring this idea to life. There is a sophisticated, elemental feel to the building, which is why Gust of Wind works so well,” said Kazerouni. “Once we had the song, there was a lot of testing and iterating to find the right notes that would produce the most fluidity. What’s cool is as you go around the building, no two faces are the same. They all represent different moments from Gust of Wind.”
A natural stone podium follows the same rhythmic pattern of the tower, anchoring the building on the site. In the courtyard, a Japanese maple tree grows out of a slate, rock water feature, offering a pop of colour framed against the dark stone backdrop.

Interior spaces, helmed by Kelly Cray of U31, aim to articulate notions of universality throughout the common areas, amenities and suites. Rather than projecting a lifestyle onto the residents, the goal was for each individual space to serve as a backdrop to the user’s own experience. “There was a real evolution to the process working with Pharrell and the whole team, from where we started with the interiors and where we ended up,” says Cray. “The palette is fairly unique in how it emphasizes darker tones balanced with natural materials. They combine to create these really compelling environments. Everything is engineered towards supporting the function of the room. When we transition into the gym or the rec room, the palette shifts to brighter tones in specific spaces to encourage activity and play.”

For more information, register at untitledtoronto.com