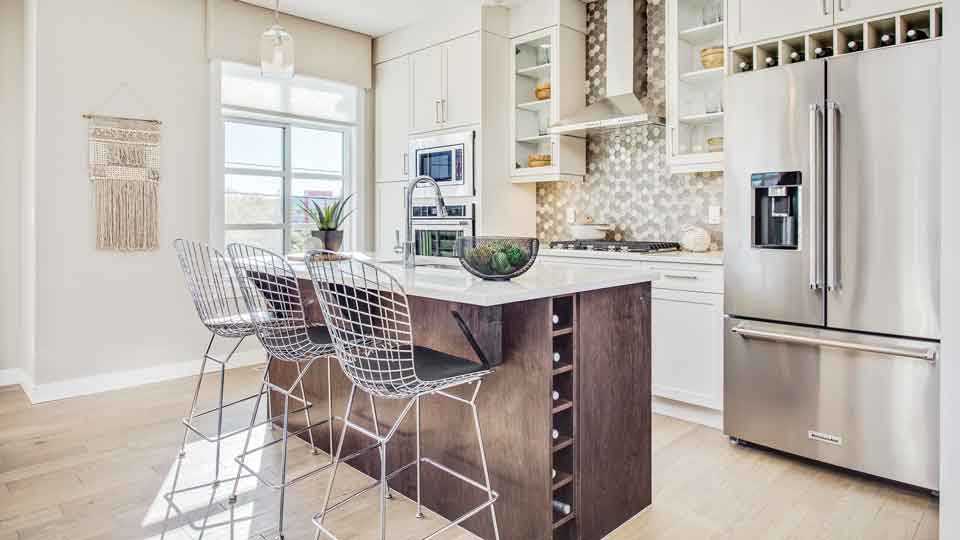 There are townhomes, and then there’s Wentworth Pointe by Trico Homes. Located in the prestigious west side community of Wentworth, these are not your standard townhomes. While one of the two show suites is billed as ‘standard’, keep in mind that this is Trico’s standard, not everyone else’s.

Both show suites at Wentworth Pointe feature the Ashbury model, says area manager Crystal Chu, in keeping with Trico’s approach of building suites to suit the building location. For example, she says, street-facing homes have the floorplan reversed so the balcony overlooks an inner courtyard rather than a busy street. Also, it allows the consumer to see the differences between a standard plan and one with all the upgrades.

The development consists of 12 blocks of townhomes, with 83 total units at final build-out. Block 6 has just been released for sale, and construction began this past June. 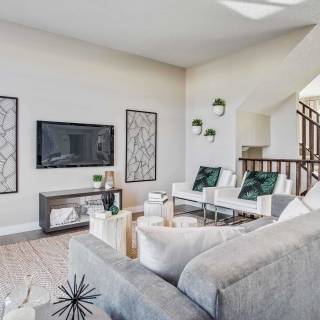 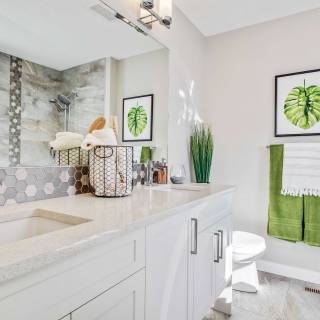 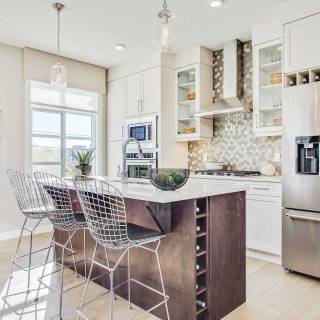 First possessions in Block 6 are scheduled for March 2020, while the last two buildings are expected to be completed by the end of 2020. There are also currently 16 homes complete and ready for immediate possession, says Chu.

Of course, with a difference of just a few square feet between the various plans, it’s really a moot point as the main difference is the size of the balcony – they’re all a good size, but the Ashbury has the largest outdoor living space, complete with a natural gas hook-up.

Both show suites feature the Ashbury model – one standard but with the dual master bedroom and ensuite option, and the other with all the upgrades, but with three bedrooms on the upper floor.

“So far,” says Chu, “it’s been pretty much a 50/50 split between the two-bedroom and three-bedroom options. It’s such a diverse market of buyers out here in terms of ages, cultures and lifestyles. I’ve never seen such a wide variety of people at different stages of life. The thing they all have in common is they want to be on the west side and they want a very residential feel to the community.”

For starters, when you enter the double garage it’s on the ground floor, not underground, meaning residents have a full basement under their home and the upper floor is a true third storey level.

What the two show suites have in common is a large, bright entry level with an extra room that can be used as a mudroom, storage space, an office, gym or, in a pinch, a guest bedroom. Both come with a full array of appliances, including a gas stove and stacked washer/dryer. The standard show suite has Whirlpool, while the upgraded home has built-in KitchenAid appliances.

Things that might be considered upgrades with some builders are standard for Trico, like quartz countertops, ceramic tile flooring in the entry way and bathrooms, and luxury vinyl plank flooring in the living spaces. Upgrading moves you into engineered hardwood floors, a modern hexagonal ceramic tile kitchen backsplash, hood fan and dark maple wood stair railings.

Best of all, says Chu, it’s all available starting from around $465,000 including GST.