Calgary remains one of the most affordable cities in the world

With the soaring increase of material costs, especially lumber, and a surprising surge in market demand, there is definite pressure on Calgary’s homebuilders to raise prices of new homes.

But according to a recent report, Calgary remains one of the most affordable cities in the world to buy a home.

New research from Online Mortgage Advisor has revealed where in the world property prices have outgrown local wages the most in the last five years, and where prices have become more affordable.

“We compared how many square feet of property a person earning the average annual net salary in each city could afford to buy and rent in 2020 compared to 2016,” the report says.

One of its key findings is that Calgary, has become more affordable in the past five years with the average person there able to afford 60.3 more square feet in 2020 than in 2016. “A bigger positive jump than anywhere else in the world,” it adds.

In which global cities did property prices become more affordable?

The Online Mortgage Advisor report says it looked at where in the world house prices have become more affordable for locals with the average annual salary, based on how many square feet of property they can purchase.

“In 2020, full-time employees in Calgary, Canada could typically afford 93.4 square feet of space. This number has increased significantly to 153.7, meaning a local in Calgary on the average local salary can buy 60.3 sq ft more in 2020 than in 2016.

“This makes Calgary the city in the world that has seen the largest increase in the amount of square feet affordable to the average local.” 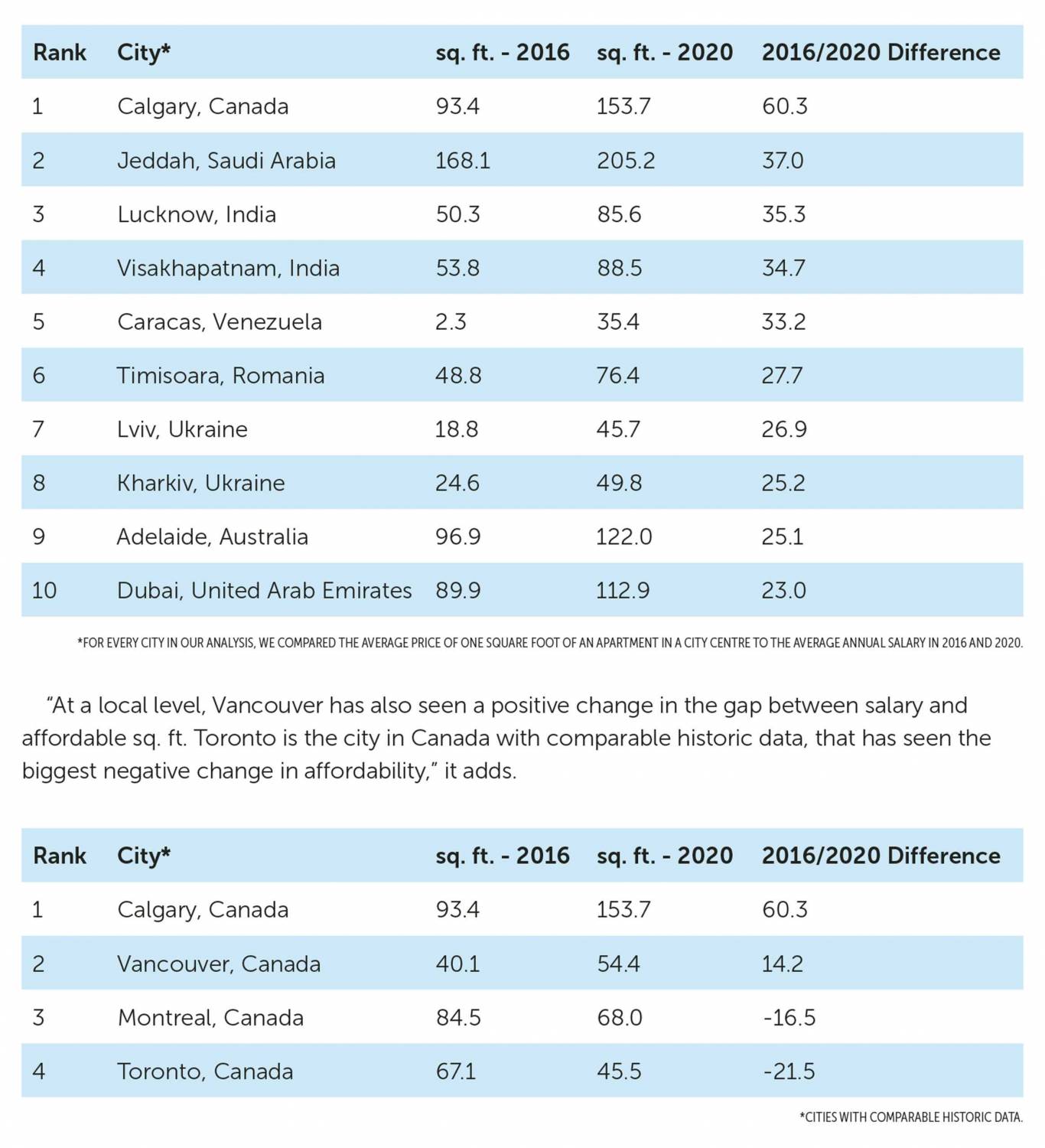 Find out more about the Online Mortgage Advisor here: https://www.onlinemortgageadvisor.co.uk/content/priced-out-property/

He told Calgary New Home + Condo Guide that Calgary’s unique affordability compared to other major cities like Vancouver and Toronto cannot be overstated.
“You have to go much further out of the city centre to find an affordable home in Vancouver or Toronto, but in Calgary inner city living is still very much affordable,” he says.

“Buying a new apartment condo now is a great investment for your future,” he adds. “You’re buying at today’s prices during pre-sales marketing phase, and by the time you’re ready for occupancy at building completion, you’re already building equity in your home.”
Ocgrow has been building in Calgary for over 30 years, and they took a big step to the future with their latest innovation: SOLA. “Our partnership with Amazon gives all buyers a huge advantage, every single luxury residence at SOLA shall be fully Alexa enabled, together with our Gigabit ethernet speeds at SOLA which are fastest in western Canada, leads to all new owners enjoying a host of intelligent cloud-based voice services,” he says.

“We see a huge tech boom in Calgary coming as our economy continues to diversify, with both current and new companies expanding growth significantly. We feel SOLA is the right product at the right time for the city.” Consul may be right, as first releases for the 172-unit concrete, 9-storey luxury condo tower in trendy Kensington have sold out, and a second release was just launched & gaining strong momentum.

Leduc At the centre of progress and prosperity

Cantiro rises to the challenges