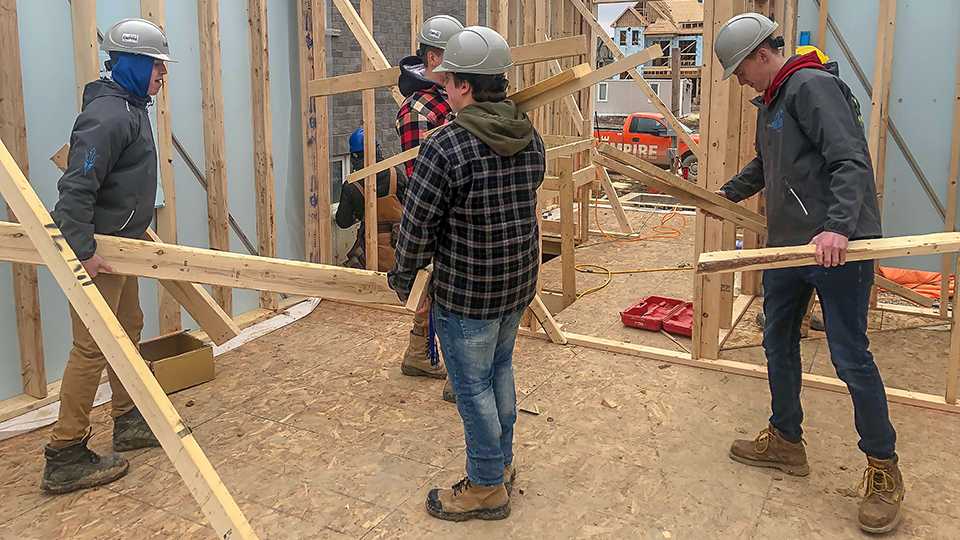 Empire Communities, one of North America’s largest homebuilders, has partnered with McKinnon Park Secondary School to give high school students valuable work experience in the trades through the Empire Co-Op Program. This program provides students from the Caledonia school with hands-on experience as they participate in different stages of new-home construction at two of Empire’s master-planned communities, Avalon in Caledonia and Wyndfield in Brantford.

Since February 2019, a group of five students has been working at each site and will continue with their co-op until the end of the school year. Empire is also proud to present the Empire Communities Technological Award – a $1,000 scholarship – to one of the graduating students in the co-op program who excels and exceeds expectations. This is intended to help support hard-working students who have a passion for the construction industry and will be pursuing a career in a related field.

“At Empire, we understand that there are unique learning experiences that only a co-op placement could provide, and we are thrilled about this collaborative partnership,” says Maria Pontes, Health and Safety Manager at Empire Communities. “Working with McKinnon Park, we have created an ideal co-op model that will give students the greatest opportunity for future growth.”

There are many unique programs offered to students at McKinnon Park Secondary School, such as the Specialist High Schools Major (SHSM) in hospitality, green industries, and/or construction. The SHSM program provides students with a red seal on their Ontario Secondary School diploma, noting the completion of specific graduation requirements.

“McKinnon Park appreciates our partnership with Empire Communities, which provides students with various experiential learning opportunities that will benefit them now and in the future. We look forward to future opportunities with Empire that will continue to engage and benefit students,” says John Gerritsen, senior construction and cooperative education teacher at McKinnon Park Secondary School.

In 2011-2012, Empire offered a co-op program to local Breslau high school students who participated in the construction of a home in Empire’s Riverland community. As Empire continues to build in new communities across Southwestern Ontario, there will be more opportunities to implement co-op programs like these in the future.
Empire Communities is a residential builder/developer involved in all sectors of the new homebuilding industry, including both lowrise and highrise built forms. Since its inception in 1993, Empire has built more than 15,000 new homes and condos. Today, Empire is one of the largest homebuilders in North America with current communities in Toronto, southwestern Ontario and the southern United States.