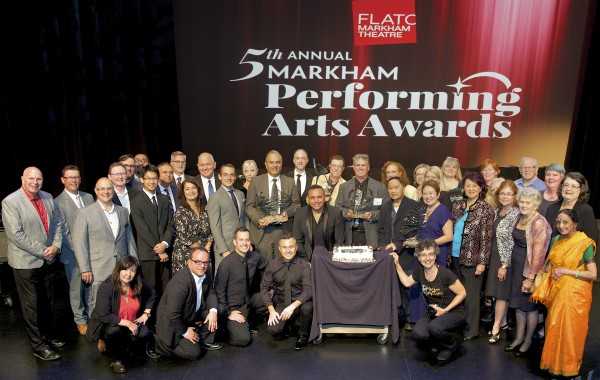 Markham Performing Arts 2019 winners, staff and artists[/caption]The Flato Markham Theatre recently hosted its 5th Annual Performing Arts Awards, with celebrations honouring homegrown artistic achievements. Special performances included a three-time Provincial champion in piano, Richard Yeh, musical excerpts from the best of Broadway from Markham producer Brian Goldenberg and a special guest appearance by award-winning recording artist, Pavlo.But the spotlight shone on the real stars of the evening: Community Group/Artist of the Year, Markham at the Movies; Professional Artist of the Year, Canada’s Ballet Jorgen; Partner of the Year, Asian Television Network; and a new category this year, Ambassador of the Year, Alicia and Alex Chiu.Markham at the Movies (MATM), chaired by Paul Sylvester, is a non-profit group, run by volunteers and film enthusiasts who focus on bringing award-winning Canadian and international films to Markham’s resident’s doorstep. Markham at the Movies is a partner of Film Circuit, a division of the Toronto International Film Festival (TIFF) group. It started at a small scale, presenting movies in the Theatre’s rehearsal hall and has grown into a popular community cultural event, now presenting a six-movie series throughout the year at the Flato Markham Theatre.[caption id="attachment_46960" align="alignnone" width="600"] 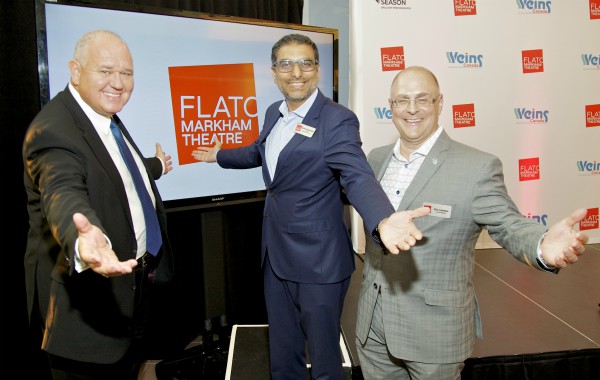 Left to right, Markham Mayor Frank Scarpitti, Shakir Rehmatullah and Eric Lariviere[/caption]Ballet Jörgenis not only an internationally respected touring ballet company, but it is also one of the only companies that will take professional ballet productions to smaller communities across Canada and into the US. Executive Director Stephen Word and his team brings outreach opportunities within those communities, giving young dancers opportunities to perform with the ballet onstage.Asian Television Network (ATN) delivers South Asian and Asian content to residents across Canada. Shan Chandrasekar, president and CEO of ATN, pioneered South Asian programming in Canada in 1971 and ATN has grown into one of the leaders in the media industry today, operating 54 specialty tv channels along with radio channels across the country.Alicia and Alex Chiu have been long time supporters of the Flato Markham Theatre. Alex left politics this last election and holds the current record for the longest serving councillor in Markham. For the Theatre, Alex has been instrumental for the growth of the Theatre Gala which raises money for its Discovery programs and has championed raising the profile of the event, making it into a prime fundraising event for culture in Markham and York Region. Alicia and Alex have been involved in the Federation of Filipino Canadians, including their “Taste of Broadway” event.Every year the Flato Markham Theatre chooses a Canadian artist to design the Markham Performing Arts Awards. This year’s talented artist is Cathy Mark. Working from her studio on the north shore of Lake Scugog, her metalwork is inspired by Canadian flora and fauna. The award she created for Community Group/Artist of the Year for Markham at the Movies is a metal sculpture of young fiddleheads and ferns representing the audience (fiddleheads) with the full-grown ferns representing the films themselves. The Performing Artist of the Year award for Canada’s Ballet Jorgen, depicts a moose teaching a bear to dance, symbolizing the ballet company (moose) offering its hand to and guiding the young bear who represents the young dancers the company mentors and their involvement in the community.Flato Markham Theatre is a jewel in the crown of the Markham community, located only 30 minutes from the downtown core. The intimate, 527-seat, state-of-the-art performance facility provides patrons with unforgettable access to a host of internationally acclaimed artists and productions through its annual Diamond Season presented by Weins Canada. Illuminating the central theme that the live arts in Markham matters, the season features the best of classical, jazz, world music, dance, comedy, pop artists, and family entertainment. Flexible ticket package options and complimentary parking are available.flatomarkhamtheatre.ca