Hamilton may be best known as a steel city – a moniker it may never shake, given the industry is still alive and well there. But here’s a more modern nickname for you – tech town.

The city of 536,917 was recently ranked as one of the top tech cities in North America for “opportunity.” Commercial real estate services and investment firm CBRE rated Hamilton number two in 2019, citing a tech scene that has grown by 52 per cent over the last five years. This, in addition to naming it Canada’s fastest growing mid-sized city for tech talent in 2018.

This reputation may be slightly unfamiliar to some, but homebuyers have known the city has been transitioning for years.

City on the highrise

Indeed, a quest for lowrise housing at affordable prices has sent throngs of buyers from the Toronto area to Hamilton over the past decade.

While more affordable lowrise homes may have encouraged GTA buyers to head west, it may be the affordability of the highrise sector that keeps them here. See, for example, the median prices for Hamilton condos, as compared to other types.

“With an average price tag of just over $530,000 (for August 2021), apartment-style properties continue to be sought-after,” says Donna Bacher, president of the Realtors Association of Hamilton-Burlington. “These properties are attractive to both buyers and investors in the Hamilton-Burlington market area. Apartment-style properties are showing better inventory levels than any of the other property types, yet are still well below normal levels.”

Developers, meanwhile, are catering to the growing demand for highrise housing in the city. A consortium of local builder and development partners and the City are revitalizing an aging neighbourhood by creating a new community of subsidized and market rental apartments, plus condominium townhomes priced below Hamilton and GTA market values. It is said to be one of Hamilton’s biggest-ever inner-city developments and a tribute to inclusivity and diversity.

City Housing Hamilton has engaged in a strategic alliance agreement for a pioneering project. Roxboro Park Inc. is a partnership of Urbancore Developments, Carriage Gate Homes and the Effort Group to undertake the revitalization of a 13-acre section of land in the city’s east end.

The revitalized neighbourhood proposes a wide variety of housing options, rental apartments and connection to parks and open space trails. First-time homebuyers will have an opportunity to own housing below market value, resulting from the city’s first-time buyer initiative. The unprecedented $400-million, master-planned community will be one of Hamilton’s largest inner-city redevelopments.

Still, the growing popularity of Hamilton is not without its challenges.

“The housing affordability crisis is not confined to one city; it is a regional issue, and it is getting worse,” Mike Collins-Williams, CEO of West End Home Builders’ Association, told Condo Life.

“It has created a musical chairs effect, where families and young people are leaving Toronto to find more affordable housing in adjacent municipalities, displacing locals who can no longer afford to live in their own community.

“In Hamilton’s case, there is more demand for housing from people leaving Toronto than actual housing supply. To put it bluntly, we need to build more housing to put a lid on rapid price growth and find a better equilibrium between supply and demand.”

It’s not just about homebuying opportunity in Hamilton, however. From educational institutions such as McMaster University and Mohawk College, to exhibits such as the Canadian Warplane Heritage Museum, to historical landmarks such as Dundurn Castle, there’s plenty to enjoy in and around the city.

Hamilton is also benefiting nicely from the billions being spent on transit and highway infrastructure improvements in the province, allowing residents to live there and easily get around the city or travel to surrounding areas.
All of this further positions Hamilton and its residents to enjoy its rising stature as a tech town, and a place to be now and in the future. 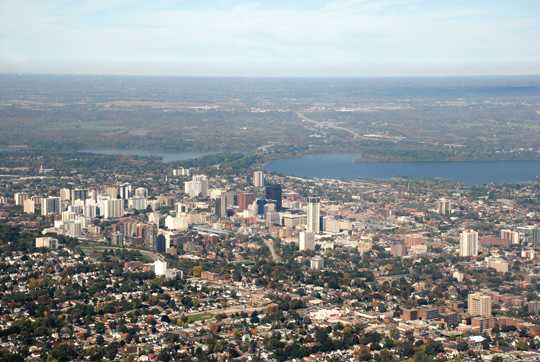 Golden Horseshoe at the west end of Lake Ontario; population of 536,917; 68 kms from Toronto, 73 kms to Niagara Falls.

Niagara – it’s about a lot more than The Falls