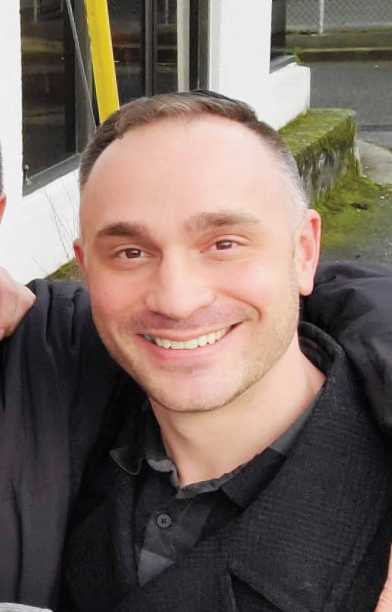 For Marshall, buying a new home was all about change. “I’d been living in a two-bedroom condo in Lynn Valley on the North Shore for about 15 years. It was great, but I wanted to upgrade to a three-bedroom. And it was just a time for change.”

He already had number of friends who lived in Langley, so he knew that this was a municipality where he could get some serious bang for his home-buying buck. So he decided to take a closer look.

Marshall checked out a few resales, but nothing spoke to him. None of them said: “Oh wow, buy me.” There was a large development under construction in Willoughby near where he was looking, but there were no corner suites available and the high density felt cold and impersonal.

Then a friend suggested a visit to Frame. “He told me the developer, Hayer Builders Group, had an excellent reputation, and it was just down the street from his place — which would be great.”

Since physical distancing rules had just been relaxed, Marshall was able to request a hardhat tour of the construction site. When he stepped into a D-Plan end unit, Marshall knew he’d found his new home. “I loved the open concept design, and because it has a side-by-side garage, the main floor is more like a large square — most of the other ones I’d seen felt really long and narrow.”

Sealing the deal were Frame’s built-in air conditioning, a must-have on Marshall’s list, the central vacuum, and a gas hook-up on the patio. “I barbeque a lot in the summer, and this way I won’t have to be heading off to Canadian Tire every few weeks for propane,” he says with a grin of enthusiasm.

When he moves in at the end of October, Marshall says one of the first things he’s going to do is purchase all new furniture to suit the style and colour palette of his new digs. “I want to really make this place my own, a reflection of who I am. After all, that’s what making a change is all about.”

SOCO by Anthem in Coquitlam