As we approach the end of 2021, it’s hard to believe that in a matter of months, we will have been dealing with the challenges of the pandemic for two full years. Even more difficult to comprehend, perhaps, might just be how well real estate markets in Toronto, the GTA and elsewhere in Ontario, have performed though it all.

This is not to say there isn’t any uncertainty, or things prospective homebuyers need to be aware of – caused by COVID-19 or other market influences – because there are.
Let’s take a look at five of them.

Housing has been an election issue at various levels before, but never quite to the degree it was in the 2021 federal campaign. Indeed, supply and affordability have become such pressing matters – not just in the GTA where various industry groups have been speaking out for years, but across much of the country – that it garnered the attention of all the major parties.

Eighty-five per cent of Canadians believe there is a housing affordability crisis, according to a recent survey by ReMax. And a report in mid-October from PwC Canada and the Urban Land Institute, Emerging Trends in Real Estate, summarizes that “homeownership remains a glaring issue, even in Canadian cities where it previously wasn’t.”

Prime Minister Justin Trudeau cannot ignore these voices or facts any longer. Overdue government attention could finally be good news for prospective homebuyers in Toronto and elsewhere in Ontario.

The Liberals made a number of promises, notably financial incentives and other initiatives for first-time buyers. These efforts might partially ease the challenges on the demand side of the equation and facilitate purchases for some, but some of the core issues relating to housing supply are largely provincial and municipal matters. And those won’t be resolved quickly.

Says Dave Wilkes, president and CEO of the Building Industry and Land Development Association, “It’s time to move from words to action and address our region’s housing supply problem by reducing approval times, designating land for growth, building infrastructure to support development and ensuring taxes on new development are transparent, equitable and invested as intended to support growth.”

In the meantime, while many homebuyers may prefer lowrise homes and those that provide more space and bigger lots due to COVID concerns, multi-family housing (read, condos) is expected to remain a strong category, thanks to affordability.

2. Interest rates may inch up

Interest rates have been at historical lows forever. Well, not really, but the Bank of Canada’s influential overnight rate has sat at 0.25 per cent since March 2020, and most experts don’t expect any notable increase until midway through next year. A tentative economy caused by the pandemic and other factors will do that.

But, with increasing concern over inflation and other issues, some rates are on the move.

“Interest rates in Canada have steadily increased over the last few months, specifically fixed rates,” says Jesse Abrams, co-founder and CEO of Homewise, a mortgage advisory and brokerage in Toronto. “Many lenders increased their rates by 20 to 40 basis points in early October due to the release of new Canadian inflation numbers, which were high. There is also an expectation that inflation in Canada will continue to rise in the near future.”

Variable rates, which are directly correlated to the Bank of Canada prime rate, are still near record lows. “Generally, Canada follows the U.S.’s lead when it comes to increasing rates, and both countries have pointed to the back half of 2022 before they do so,” says Abrams. “However, with inflation rising, job numbers almost back to normal, bond yields rising and escalating home prices, we may see rate increases to both fixed and variable rates sooner than expected.”

So, as a number of contributors in our Expert Panel, Industry All-Stars and other content in this Builders’ Annual suggest… now is not the time to buy more home than you can really afford – especially at these prices. 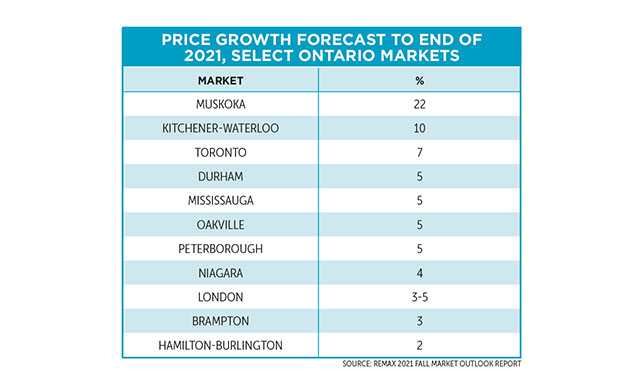 Ontario has long been a stellar performer in terms of home price growth. Current COVID challenges aside, people still want to come and live and work in the GTA and elsewhere in the province. Strong and diverse economies produce employment opportunities, which lead to population growth and healthy real estate markets.

The ReMax 2021 Fall Market Outlook Report, for example, cites that the province has seen some of the highest average residential price increases for single-detached homes in the country. The majority of regions saw increases between 20 and 35.5 per cent, year over year. During a pandemic. Markets where price increases were below 20 per cent include Toronto at 14.6 per cent, and Mississauga, 19.7 per cent – still very strong numbers.

Most of these markets still expect to see more price growth between October and the end of the year:

4. Immigration on the rise

Immigration, one of the key drivers of housing demand, could return to pre-COVID levels in 2022. International immigration to Toronto was down by almost half in 2020 due to restrictions, is inching back up this year, and as many as 300,000 new immigrants could come to the GTA over the next three years.

All those new federal initiatives to address homebuilding and buying discussed earlier, and whatever the provincial and municipal governments might do to on the supply front? It’s highly unlikely they will have a notable impact in the short term. Which means… it’s easy to see where housing demand and pricing will trend in the next couple years at least – upward.

Wellness isn’t exactly a new concept, and it may mean different things to different people, but it’s clear that this is a growing focus of consumers, on many fronts.

But it goes beyond just condo design and efficient use of space. The Emerging Trends in Real Estate report, in fact, highlights that Canada’s real estate companies are rethinking their strategies as they look ahead to 2022. “(They’re) paying close attention to several forces of change: The impacts of a changing world of work; environmental, social and governance (ESG) matters; and rising costs and competition. As they navigate these and other business pressures – including the growing concern about housing affordability – real estate companies have an opportunity to embrace creative solutions to stay ahead of the challenges and plot their growth strategies for the future.”

Niagara – it’s about a lot more than The Falls