Collingwood has long been a popular vacation destination, mostly as a weekend winter getaway to tackle some of the best skiing in Ontario at The Blue Mountains. Summertime, too, has seen increasing activity, as residents from the GTA and elsewhere head to “Blue” for cycling, golf and many of the other activities and festivals in the area.

But there’s a lot more happening in this part of Simcoe County, situated on the Nottawasaga Bay at the southern Georgian Bay Region. A beautiful natural location will do that.

Transitioning for the future

Economically, it’s fair to say that Collingwood is an area in transition. The town’s traditional industrial base has been in decline for years, though the waterfront Collingwood Terminals grain elevators remain standing as a reminder of this heritage. Some view the massive grey structure, dormant for more than 25 years, as an eyesore for such an area blessed with natural surroundings. The Town is said to be considering selling, preserving or even dismantling the landmark silos.

All of this underlines the growing importance of Collingwood to maximize its potential as a four-season recreation destination, blessed with mountains on one side and Georgian Bay on the other, while developing new economic opportunities. And to do it all at a pace and size that doesn’t result in the loss of greenspace or the “small-town feeling” that residents and visitors alike have come to love.

In a recent poll conducted by the Town, the overwhelming majority of respondents (63 per cent) believe the municipality should focus on growing the knowledge-based industry. There is already a strong and growing tech industry in town, including the only deuterium producer in Canada, the largest industrial glass manufacturer in North America, and a maker of advanced underwater communications.

The survey also revealed that just 29 per cent of respondents said job growth in Collingwood should focus on tourism, highlighting a local concern that the town relies too heavily on that sector.

The survey further revealed that residents prefer any new home development focus on the multi-family category, such as condominiums and other mixed-use buildings on smaller lots, as well as Green housing.

Given the area’s popularity as a playground destination, real estate in Collingwood sometimes shows the fluctuations that typify the recreational property market.

Many recent buyers are residents from the GTA purchasing vacation properties, or cashing out their primary residences in the city and moving north for retirement, reflected in the older demographic in town.

And in terms of recreational property, this is where Collingwood proves its mettle.

Still, given the prized location and blessed natural abundance in Collingwood, it’s no surprise that new home development is taking place to cater to the growing demand. Georgian Communities has a number of prominent new developments in the area, including Mountain House at Windfall, right in Collingwood.

The beauty of this area is also its proximity to other sought-after locales, which are also growing into popular new-home destinations. If you’ve visited the area recently, recall the drive up, and passing through surrounding towns such as Barrie, Shelburne, Horseshoe Valley, Innisfil, Holland Landing, Oro Medonte, Beeton, Dundalk, Wasaga… all of these areas have new lowrise home developments from prominent GTA builders such as Fieldgate Homes, Georgian Communities, Flato Developments, Georgian, Democrat Homes, Rosehaven Homes, Geranium and Stonebridge Building Group.

At any time of year, Collingwood is a nature lover’s paradise. Of course, there’s expert skiing at Blue Mountain in winter, as well as countless snow-shoeing, snowmobiling or cross-country skiing options.

In the warmer months, hit the links at any one of the handful of championship courses in the area, from the semi-private Cranberry Golf Resort, to Monterra at Blue Mountain Resort, to the Georgian Bay Club and more.

Or book a breathtaking treetop canopy walk, or zipline adventure, or just hit the beach for a swim or canoe or kayak rental. And if you’ve never been, head over to Wasaga Beach, the world’s longest freshwater beach, a short distance away (see story on next page).

Festivals? You want festivals? Collingwood’s got lots of them, from Collingwood Whiskylicious, the Peak to Shore Music Festival, Keys to Collingwood Street Piano Festival and the famous annual Elvis Festival.

All, of course, COVID permitting. 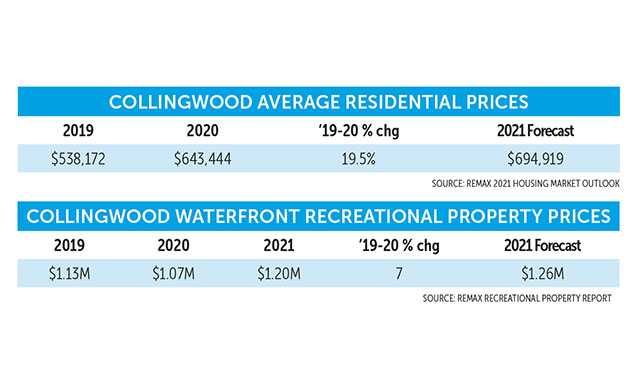 In Simcoe County, on the Nottawasaga Bay, at the southern point of Georgian Bay; population 21,793; 160 kms north of Toronto; 21 kms to Wasaga Beach. 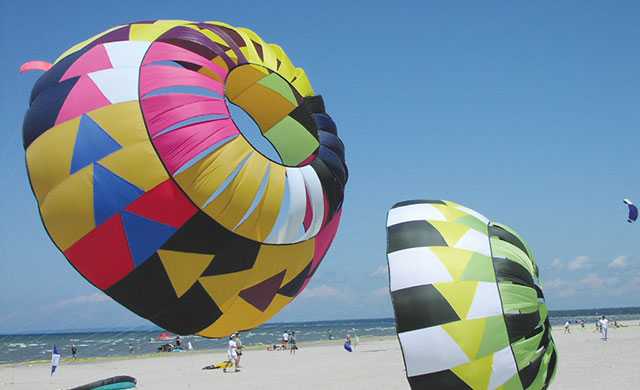 WASAGA – COME FOR THE BEACH, STAY FOR THE LIFESTYLE

The pristine waters of Georgian Bay have long made Wasaga Beach one of the most popular summer tourist destinations north of the GTA.

Located only about two hours north of Toronto, in Simcoe County, and a short drive from Collingwood, Wasaga swells well beyond its population of about 21,000 during the warmer months.

But also like many other surrounding towns and cities, Wasaga is undergoing a serious transition, taking it well beyond its traditional image as just a little beach town.

A Downtown Development Master Plan launched by the Town in 2017 was intended to develop a “sustainable and practical plan for a more livable, diversified, competitive, sophisticated, accessible and sustainable downtown Wasaga Beach,” including the redevelopment of the aging Main End.

The plan called for higher density housing types in the downtown area, specifically condos and townhouses. The bulk of this development was targeted for three main corridors (Main Street, Mosley Street, Beach Drive), with densities declining to townhouses and single-detached homes further out of these corridors.

The Beachfront, Lower Main and Upper Main districts are all also benefitting from a focus on redevelopment, with slightly different focuses for each, according to the Town. The plan for the Beachfront was to make it the entertainment centre and to bring the “fun” back to Wasaga. Lower Main is the centre of the year-round residential population – the community’s place to live, work and play. Upper Main, meanwhile, is to be a transition area from the more suburban built form, with a focus on mixed-use development.

One developer catering to the rejuvenated interest and growing demand for new housing in Wasaga is Stonebridge Building Group. The company is now selling the final release at its Beachway Crossing community in the Stonebridge area, offering two-storey townhomes and bungalow townhomes.

Like elsewhere in the region, home sales in Wasaga were down from year-ago levels, but still recorded the third best June in history.

“The market can best be described as ‘cooling off,’ from red-hot to hot,” says Lidbetter.

Outlook 2023 – why this will be a better year for homebuyers